Have you made a claim against an insurance giant and got a section 78 reply saying that they reject your claims for compensation?

The insurance company has generated a big intimidating pdf document on company letterhead, with the words “Deny” or “Declined” your claim, or something along the lines of “our company does not have liability at this stage in respect of your claim for lump sum compensation in respect of your right knee sustained at work on __________.”

The paperwork is big and scary, and you think “it’s all over”, you can’t possibly do any more?   …or can you?

Don’t lose heart.  The challenge for us is overcoming a mean-spirited decision by workers compensation insurers who routinely deny claims or table reasons why they have done so.

Quite often, there IS  more you can do, and in most circumstances, you won’t have to pay a cent more.

So let’s get started and analyze what it is you have been sent. 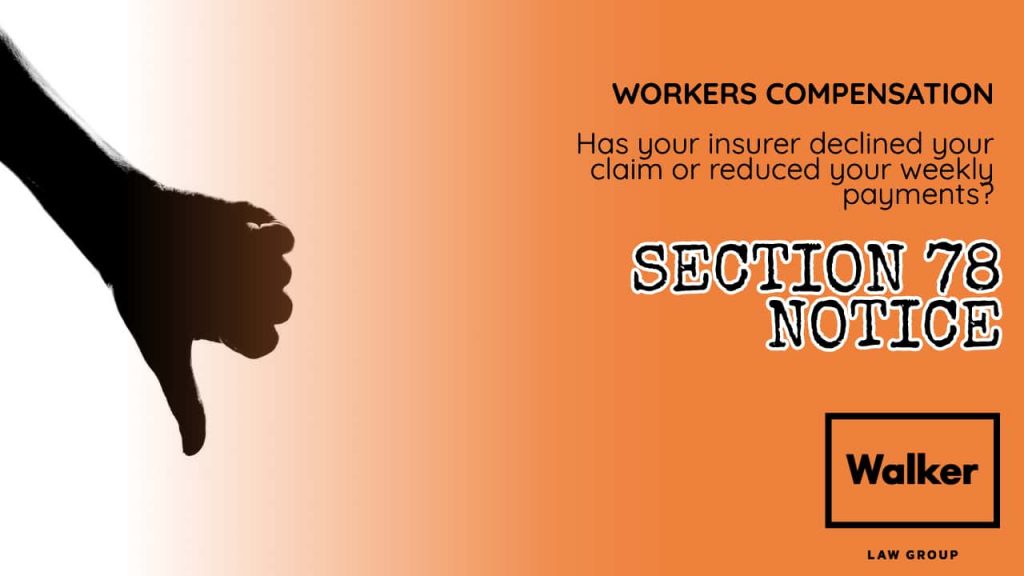 A Section 78 Notice is a document constructed by the employers Insurer, which outlines their decision and the reasons why they have formulated this decision.  It will state why they are declining the claim for either weekly compensation or medical expenses or both (weekly payments AND medical expenses).

Sometimes the insurer will not state in their letter the type of document (for example, a S78 Notice) they will state ‘Important Information about your Workers Compensation Claim’.

The S74 Notice has now been changed to a S78 Notice for all new matters, under new changes to the Workers Compensation legislation, wherein they have also combined Section 54.

From now on all dispute notices will simply be known as Section 78’s.

The Section 78 form part of the Workplace Injury Management and Workers Compensation Act 1998, which dictates that the Insurer must include a copy of all documentation they used to formulate their decision to decline your claim and also set out the reasons why liability has been declined. Medical reports will also be included.

This document must be sent to the person making the compensation claim.  If only a phone call is received declining a reimbursement without sending out a Section 78 Notice then this is in breach of the legislation, call us and we will be able to investigate further for you.

Most of the time when a case has been denied the insurance company simply needs more time to investigate the matter and their decision can be overturned with the help of a solicitor or Medical Evidence stating otherwise. People often think the denial ends their case – which is wrong.

The insurance company can decline certain parts of a Workers Compensation claim such as particular requests for treatment. For example, a client received a denial notice for a treadmill that they were recommended by a doctor. The insurer stated: “We are therefore disputing liability in relation to the request for a treadmill only.”

A big red flag to help clients identify if their claim has been denied is if their weekly payments have ceased or their medical expenses are not being paid for or referrals approved.

When assessing injuries sustained as a result of a workers compensation incident, Doctors that have been engaged may not be looking at the case carefully.  People tend to pin their hopes on discredited Doctors who don’t stand up to the enquiry!

You’ve been declined!  What do you do?

Well, your instinct is to go back to the insurance agency and request an internal review, but generally, you will just lose a whole lot more time and potentially receive the same result.

What we do when we receive S78/S74 Notices is apply to WIRO (Workers Compensation Independent Review Office) for further funding to dispute their decision. These denial notices can be overturned with help from a solicitor, simply call one of our expert Workers Compensation Lawyers at Walker Law Group.  If we don’t win your case, there is no cost to you.

Section 78 Notice sent from your insurer will typically have the following components.